“With his fiery breath, Baby Bowser can defeat enemies and melt ice. Breathe fire by pressing Y button. Keep in mind that Yoshi can't make eggs with Baby Bowser on his back, but he can still pick them up and throw them.”
—Description, Yoshi's Island DS

Baby Bowser is, as the name suggests, Bowser as a baby. He looks similar to his son, Bowser Jr.

In his debut, Super Mario World 2: Yoshi's Island, Yoshi must enter the castle and work his way to Bowser's bedroom, which is filled with toys. When Kamek tells Yoshi to hand over Baby Mario, Baby Bowser wakes up and tells them to be quiet cause he is "sleepy". Kamek is instantly filled with fear. Baby Bowser stomps on Kamek before noticing Yoshi. Thinking Yoshi is a donkey, he tries to ride him several times but Yoshi knocks him out. Kamek returns and "helps" Baby Bowser by turning him into a giant, destroying most of the castle in the process. As a giant he appears more like his grown up self. After a long, epic battle Bowser is reverted to his baby self and is unconscious. Kamek is horrified and calls Yoshi a meanie before flying off into the night with Baby Bowser. Yoshi then frees Stork and Baby Luigi and the stork flies away with the babies into the night.

The giant version of him is the biggest boss in the game. Even though he is the final boss he is not the main antagonist, as Kamek is. He is also one of the two only characters who talk in the game.

In Yoshi's Island DS, Baby Bowser helps Baby Mario, Baby Peach, Baby Donkey Kong and Baby Wario to save Baby Luigi. While riding on Yoshi he can breathe fire, which can defeat enemies and light up torches, as well as performing a lot of the moves that an egg can do (destroying ? clouds etc.) but it stops Yoshi from being able to lay eggs (he can still pick them up and throw them.) At the end of world 4, he gets taken by Kamek, but rejoins the babies later on (in Bowser's Castle) However he betrays the other babies when they reach the end of his castle. The other babies and the Yoshi's succeed in defeating Bowser and rescue Luigi. When he betrays Yoshi near the end of the game, his attack moves include breathing fire at Yoshi, jumping, breathing fire downwards, then ground-pounding, after having six eggs thrown at him, he will be defeated and Yoshi will then have to fight Bowser.

Baby Bowser makes a cameo in Yoshi Touch & Go as one of the selectable high score icons. He also appears when Yoshi gets a Game Over with over 3000 yards on the Challenge Mode, laughing with Kamek.

Baby Bowser returns in this game after not being seen for 7 years, wanting to turn Egg Island into a resort. At the end of the game, a similar scene of him awakening from slumber and fighting Yoshi begins, with him turning giant after. After he is beaten, his future self reappears wanting to protect him making Yoshi defeat him.

In this game, Baby Bowser wants to have enough yarn to make himself a castle. In this battle, Yoshi must attack Baby Bowser by throwing a yarn ball at him and then ground-pounding him. After the first phase, Kamek makes him a giant using the Wonder Wool. In this phase, Yoshi must unravel giant yarn balls to get smaller yarn balls to throw at eight weak-points, shown as magenta Wonder Wools on Baby Bowser's body. After this, Baby Bowser is taken back by Kamek to the moon, before Kamek is scared by Poochy, causing him to drop the tyke.

Baby Bowser and Kamek are once more the main antagonists in Yoshi's Crafted World. In this game, he steals the Sundream Stone with Kamek, wanting to find the five Dream Gems from it. However, Baby Bowser joins Kamek in the quest, dismantling the train in the first level and making the bosses. He is also the final boss of the game, with his phases being inside a large robot and then growing to a large size once more.

Mario and Luigi: Partners in Time

Baby Bowser's first and only appearance in the Mario & Luigi series is in Mario & Luigi: Partners in Time, where he is a major antagonist. He first appears at the beginning of the game, in an attempt to kidnap Baby Peach. Luckily, Baby Mario and Baby Luigi show up in the nick of time to play with Baby Peach. After Baby Mario defeats him however, the Shroobs attack Princess Peach's Castle. Fortunately, everyone manages to escape on Baby Bowser's Koopa Cruiser. On the way to his castle, Baby Bowser picks the Mario and Luigi from the future to get Baby Peach to stop crying. On the Koopa Cruiser, he receives a transmission from Princess Shroob at Shroob Castle. She tells the crew something in the Shroobs' language and shoots down the Koopa Cruiser with a Shroob missile.

Later on, Baby Bowser heads off to Thwomp Volcano to build a new castle, where he meets his future self, Bowser. After a minor argument, Baby Bowser and Bowser team up, not knowing the other ones identity, against the Mario Bros.. They end up being beaten after the battle and flung into the sky by a Thwomp, where Bowser ends up in a Time Hole and Baby Bowser ends up on top of the Shroob Mothership.

Baby Bowser shares many physical qualities with his adult counterpart. They both have red hair and black cuffs on their arms. Baby Bowser has cuffs on his neck in Super Mario World 2: Yoshi's Island and in Yoshi's Story. In these appearances, as well as in Yoshi's Island DS, Baby Bowser appears with spiked cuffs, while in Mario & Luigi: Partners in Time, his cuffs appear with no spikes. Like Bowser, Baby Bowser has two red eyebrows, a green shell with spikes and two small nostrils on his nose. Baby Bowser also has claws on his hands and his feet. Unlike Bowser, Baby Bowser either has no horns or his horns are small and stubby, much like Bowser Jr.'s, depending on the game.

His personality is similar to Bowser Jr.'s. A spoiled child, Baby Bowser frequently throws tantrums in hopes that his minions, Kamek and the Koopa Troop will give him what he wants. He is greedy and very gluttonous, as shown in Mario & Luigi: Partners in Time, where he eats a huge pile of Yoshi Cookies and the Cobalt Star. Toadbert calls him a "Little Piggie". He even insulted his future self in Yoshi's Island DS. 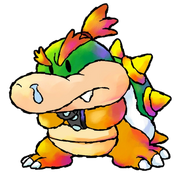 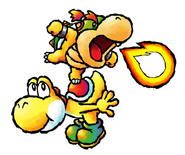 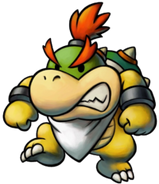 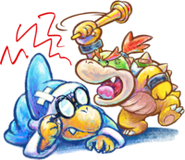 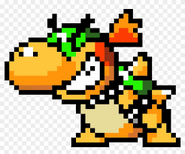 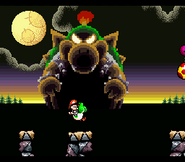