Black Yoshi is a black alternate coloration of Yoshi that has special abilities similar to the White Yoshi. They wear white boots.

Its first appearance is in Yoshi's Story. It likes all fruits, peppers and black Shy Guys. Its white shoes stay for every other appearance. His voice is considerably deeper than the other Yoshis, especially White Yoshi.

Black Yoshi can hold up to 50 eggs in this game.

It's playable along with White Yoshi in the secret levels in Yoshi's Island DS.

Black Yoshi appears in this game as a QR downloadable character. Its skill is All-Around, like Mario and Luigi.

Black Yoshi is a special Yoshi, cause all of its levels have to be unlocked. They're all secret levels.

World 3: A Light in the Dark 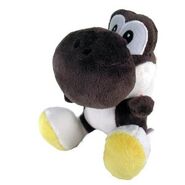