Yoshi Wiki
Register
Don't have an account?
Sign In
Advertisement
in: Articles in need of cleanup, Under construction, Characters,
and 25 more
English

The page is under constuction. While it is being constructed, please do not edit the page. We will have it done as soon as possible.

“Give it to me straight...Princess Peach is gone? Hello? That is MY thing! Only I get to kidnap her!”
—Bowser, Mario and Luigi:Dream Team

Bowser (Japanese version: Koopa (クッパ Kuppa)) is the main antagonist of the Mario series. He is known to have the power to spit fireballs. Bowser also has eight children that made their first appearance in Super Mario Bros. 3. Bowser, as a baby, hated Yoshi and he thought he was a green donkey and wanted to ride on him. This later turned out in a massive battle with an overgrown Baby Bowser. Kamek has cared for him ever since he was a baby and he still helps Bowser by helping him when he is sick or letting him turn giant. Bowser one time turned the whole Island into a book, in Yoshi's Story. He is in love with Princess Peach, but in Yoshi's Island DS it was proved that he didn't love her as a baby. This is likely due to lack of knowing her then and age.

Bowser was created by Shigeru Miyamoto as the villain of Super Mario Bros. Miyamoto stated that they considered naming him either Kuppa (국밥), Yukke (육회), or Bibinba (비빔밥), which are all Korean dishes as they are known in Japanese. In the end, "Kuppa" was chosen. For the later North American release of the game, which also introduced the anglicized spelling Koopa, the character was named "Bowser".

During the development of Super Mario Bros., Miyamoto considered asking a manga artist or illustrator to do the art for the game. However, time was running short, so he drew the game's original box-art himself. This artwork included a depiction of Bowser that is significantly different than later designs, the most obvious anomalies being his grey-blue skin and lack of horns. For the character's appearance, Miyamoto drew inspiration from an anime film adaptation of the Chinese novel Journey to the West, renamed Alakazam the Great during the film's American localization. He liked the film's main antagonist Gyū-Maō (lit. "Ox Demon King," King Gruesome in the dub), so loosely based Bowser on an ox as a homage.

Yoichi Kotabe, an animation artist, later joined Nintendo and was asked to do new illustrations for the Mario series. His only reference was the package illustration for Super Mario Bros., so Kotabe asked Miyamoto many questions on how to draw the characters. However, designing Bowser caused problems, since Miyamoto hadn't drawn him often. He brought up that he liked the Ox King from the film, and this was how he imagined Bowser, but Nintendo designer Takashi Tezuka pointed out that Bowser should be a turtle. Through their discussions, Bowser's appearance gradually came together. Since he was now in the turtle family with the Koopa Troopas, they partly based Bowser's new appearance on them. Finally, the new design was created, and Miyamoto congratulated himself by saying "Wow, I can really make Bowser look cool now!"

Bowser's first chronological appearance in-universe is as Baby Bowser in Super Mario World 2: Yoshi's Island. At this age, he is shown to have similar powers to the ones he currently possesses as an adult.

When Baby Mario and Yoshi enter his room in his castle, Baby Bowser is unintentionally and forcibly awakened from his nap by Kamek (who is trying to demand Yoshi to give Baby Mario) and pounds her flat in retribution. Baby Bowser then notices Yoshi and decides he wants to ride the "green donkey". He notices that Baby Mario is riding Yoshi, however, so he attacks them to get Baby Mario. Yoshi eventually defeats Baby Bowser, even when Kamek turns him into a giant. Super Mario World 2: Yoshi's Island is also his first meeting with Mario.

Baby Bowser later steals the Super Happy Tree from the Yoshis and turns Yoshi's Island into a pop-up book in Yoshi's Story, but is defeated again by a newborn Yoshi. Both incidents quickly define the young Bowser as a selfish character lacking empathy.

In Yoshi's Island DS, he teams up with the heroes to defeat future Bowser after being betrayed, but betrays them at the end of the game. Baby Bowser is also one of the Star Children.

Mario and Luigi: Partners in Time

In Mario and Luigi: Partners in Time, Baby Bowser once again appears. At the beginning of the game, he attempts to kidnap Baby Peach, but ends up evacuating everyone when the Shroobs attack. They are shot down by the Shroobs after intercepting a transmission, however. He later steals the Cobalt Star Shards the Mario Bros. have collected and flees to Yoshi's Island, where he is found eating Yoshi Cookies he stole from the islanders. After he eats the shards, Baby Bowser, along with everyone else, is eaten by Yoob, though everyone later escapes. After leaving Yoshi's Island, he heads to Thwomp Volcano to build a new castle, where he finds future Bowser. They team up to defeat Mario and Luigi, though are both defeated. Later on, he reunites the Cobalt Star Shards, unintentionally reawakening Elder Princess Shroob, who transforms him into a Shroob Mushroom, but he is later transformed back to normal and flees.

In Super Mario World, he has yet once again stolen the Princess and his Koopalings have helped him in this one. They attacked the Island and stole Yoshi Eggs, too. At the final battle, Bowser is battled in his clown car and Mario must defeat him.

Bowser and the Koopalings take over the kingdom of Jewelry Land, kidnapping the rulers King Fret and Prince Pine and steal twelve magical gems in Yoshi's Safari. This causes a disturbance, causing an earthquake that splits Jewelry Land into the Light Realm and the Dark Realm. Mario, riding Yoshi, heads for Jewelry Land with the Super Scope Princess Peach gives them to defeat Bowser.

After traversing every land, the duo arrive at Bowser's Castle. Once all of the minions inside the castle are defeated, Yoshi and Mario fall down a pit leading to a room with Bowser wearing a robotic suit of armor. Inside the armor, Bowser attacks by shooting projectiles at them with the blasters on the hands. However, the entire robot is invincible except for the hands; attacking these enough times disables them and cause the robot's actual weak point to be revealed. When this is attacked enough times, the robotic suit is destroyed, revealing Bowser himself. In this state, he attacks Mario and Yoshi by tossing Koopa shells at them. Like with the robot, Bowser's hands are the only venerable part of him at first. Once his hands are shot enough, they are disabled (being wrapped in bandages) and Bowser attacks by breathing flames at them. Yoshi and Mario must shoot Bowser's head in order to damage him at this point. Once he is shot at enough, Bowser surrenders (appearing dazed and holding two white flags). The game's credits state that Bowser and the Koopalings return to their home.

After beating the game, a code for the hard mode is unlocked, increasing the difficulty and changing level colors. The text is also changed, to make it appear as though the events of the game are occurring a second time. Mario must once again save King Fret and Prince Pine, as well as reclaim the twelve gems to save Jewelry Land. After defeating Bowser a second time, the game states that he and the Koopalings return to their home for good. 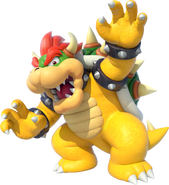 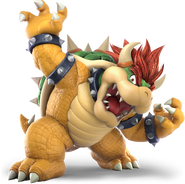