Giant Bowser is a form of Bowser from Yoshi's Island DS.

Giant Bowser appears as the final boss of Yoshi's Island DS. After he is defeated in the level At Last, Bowser's Castle!, Bowser is enlarged by Kamek. Four differently-colored Yoshis battle him at once with the assistance of Baby Mario, Baby Peach, Baby Donkey Kong and Baby Wario.

Giant Bowser attacks from the background. He will attack by breathing fireballs and dropping rocks on the Yoshis. To defeat him, the team must collect Giant Eggs from Item Balloons floating by and throw all of them at Giant Bowser at once. He is defeated after six hits. After his defeat, Bowser shrinks down to his normal size and is carried away by three Toadies, on Kamek's orders. 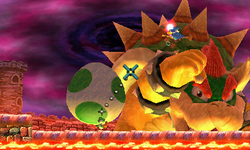