He is a regular Red Koopa Troopa but has magically grown to a bigger and more powerful form, thanks to Kamek's magic.

Hookbill begins as a regular-sized Red Koopa but is enlarged by Kamek. He attacks Blue Yoshi by jumping on him and pounding him with his shell. When Blue Yoshi jumps on him, he spits eggs out of his mouth. To defeat him, Blue Yoshi must shoot him with eggs until he falls on his back. Yoshi then just pound him. After doing this several times the shell is crushed and Hookbill is forced out. Hookbill is then seen falling past in his normal size only in his underpants. 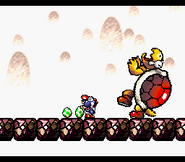 Hookbill getting hit by an egg.