Yoshi Wiki
Register
Don't have an account?
Sign In
Advertisement
in: Articles in need of cleanup, Characters, Enemies,
and 11 more

Ludwig Von Koopa is one of Bowser's seven Koopalings. He is the oldest of all of them. He used to be Bowser's second in command, til Bowser Jr. showed up. Ludwig has dark magic, like his father.

In the game Super Mario World, Ludwig Von Koopa gets revenge on Mario, and in his boss battle he can: shoot fireballs, jump very high and spin his shell around. Like his siblings, he was beaten by Mario. Ludwig is the boss of Twin Bridges. He is yellow in this game.

In the game Yoshi's Safari, he is battled in a large robot, with four legs, a spiked shell and two cannons attached to its head. After his robot explodes, the pieces salvage themselves together to form a fighter style mech that has fists and flies off to attack Mario and Yoshi. After this robot is beaten, Ludwig is defeated.

He has one fang in the middle of his mouth.

In New Super Mario Bros U, Ludwig Von Koopa is a boss in his air castle behind the clouds. He uses its magic to make a triplet of himself. 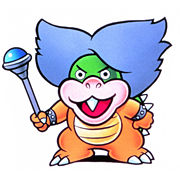 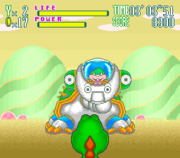 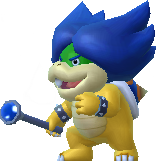