Yoshi Wiki
Register
Don't have an account?
Sign In
Advertisement
in: Articles in need of cleanup, Characters, Pages with non-canon sections,
and 15 more
English

Orange Yoshi (A.K.A. Light Brown Yoshi) is a variation of Yoshi. It wears blue boots.

Yoshi will turn orange when it eats certain Fruit, namely pineapples and pears.

Orange is one of the colors Yoshi Kid will turn if 10-15 minutes have passed between Mario obtaining its egg and it hatching.

Orange Yoshi appears in Marathon mode between every 10,000 and 14,000 yards and can carry 50 eggs. This is the first appearance of Orange Yoshi in a Yoshi game. But it's also said that the Orange Yoshi is the long lost Brown Yoshi.

Orange Yoshi appears in the sixth level of every world. This was thought to be his last appearance due to the Yoshi series going on hiatus for a while.

Orange Yoshi Was kidnapped alongside every non original Yoshi other than Red Yoshi. 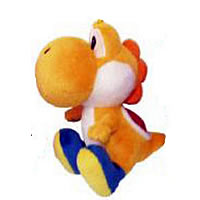 Orange Yoshi's sprite without a baby in Yoshi's Island DS

Orange Yoshi looking worried about it's next adventure in the Yoshi's Island DS Yoshi clan artwork. 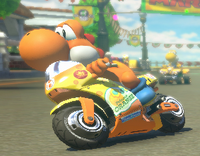 Orange Yoshi Racing in Mario Kart 8 with Yellow Yoshi behind it. 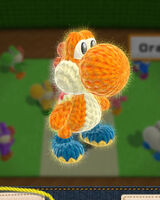