Yoshi Wiki
Register
Don't have an account?
Sign In
Advertisement
in: Characters, Allies, Species of Yoshi,
and 14 more

Pink Yoshi appears in Super Mario World 2: Yoshi's Island. It is playable in the second level of each world.

Pink Yoshi appears in Yoshi's Story as a playable character. Their favorite fruit is Apples just like Red Yoshi. It now has yellow shoes and can eat regular Shy guys that are worth three hearts.

Exactly the same as Super Mario World 2, except it has the light blue shoes.

Again, Pink Yoshi is playable in the second level of each world.

Pink Yoshi is playable in New Super Mario Bros. Wii. It is the last Yoshi ridable in multiplayer.

Pink Yoshi Is kidnapped alongside every non original Yoshi other than Red Yoshi.

Pink Yoshi is an QR downloadable character in Mario Tennis Open. It can be unlocked via QR code. He has Technique skill, like Red Yoshi, Peach, Daisy and Luma.

The Yoshi Island DS levels that Pink Yoshi appears in are: Watch Out Below!, The Baseball Boys, Jungle Rhythm..., The Cave Of The Lakitus, Ride The Ski Lifts, The Cave Of The Bandits, Hit The M Blocks!, Underground Mysteries, The Goonie Coast Isn't Clear, High Speed Cart Race and Goonie Heights.

Holding an umbrella in Yoshi's Story 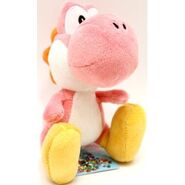 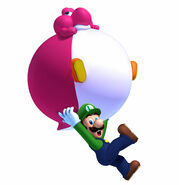 A baby Pink Yoshi in New Super Mario Bros. U.