Poochy (Japanese version: Pochi (ポチ Pochi)) is a friendly dog and an ally to the Yoshis and the babies in the Yoshi series. He possesses the ability to run across hazardous terrains without a scratch and tries to jump over walls, giving the Yoshis a boost. This friendly pup also can swim and follows Yoshi everywhere. Poochy also has an excellent sense of smell that helps him sniff out items.

Poochy first appears in Super Mario World 2: Yoshi's Island and is an ally to the Yoshis and the babies. He, as mentioned above, does all the things he regularly does and follows Yoshi everywhere, except through a pipe or door as he cannot enter them. He first appears in the secret level of World 1, "Poochy Ain't Stupid". He also appears in "Visit Koopa and Para-Koopa" and "Jungle Rhythm..."

Poochy appears in Tetris Attack and rivals Yoshi in the game. He has a Grinder as an ally to him. When he and his Grinder ally is defeated in the match, he can become a playable character.

Poochy reappears in Yoshi's Story where he is, once again, an ally to the Yoshis. The Yoshis cannot ride on Poochy, but Poochy can dig for fruit and helps all of the Yoshis restore happiness to the island. Poochy can usually be found tied to a chain on a post in Treasure Hunt and Ground Pounding helps free him. Poochy barks when he finds hidden items to alert the Yoshis.

Poochy appears in a Gaddget called Poochy Pal. He can be seen doing things a regular dog would do.

Poochy appears as an assistant. There's also levels called Poochy Dash and stop-motion shorts with him and Yoshi.

Poochy appears in Bowser's Kingdom, when Mario uses Cappy to capture Lakitu, Mario fishes for Poochy, once Poochy appears, he becomes a Power Moon. He can also be seen on various pieces of Hint Art. 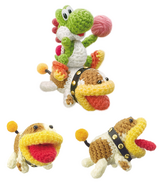 Poochy giving Yoshi a ride and his appearance in Yoshi's Woolly World.