In this game, they were able to spit fireballs when they ate any colored Koopa Troopa. Other than that, they act exactly the same as a normal Yoshi.

A Red Yoshi is playable in the seventh level of each world. Pink Yoshi looks a lot like it in this game but this was later changed.

Red Yoshi returns in Yoshi's Story as a playable character. It now has blue shoes, which is the current design. Its favorite fruit is Apples just like Pink Yoshi.

It appears exactly the same as in Super Mario World 2, except it keeps its blue shoes from Yoshi's Story.

Again, Red Yoshis are playable in the seventh level of each world.

Red Yoshi is an unlockable character in Mario Tennis Open. It can be unlocked via a QR code. Its skill is Technique, much like Pink Yoshi, Peach, Daisy and Luma.

This Yoshi is the only non original Yoshi who is never unraveled by Kamek as he takes cover with the lead Yoshi in a different file. He is playable, too. In addition to this, there are some other varieties of Red Yoshi such as Bunson the Yoshi and Apple Yoshi. They share the same transformation egg color as the regular red Yoshi himself. 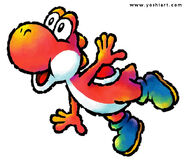 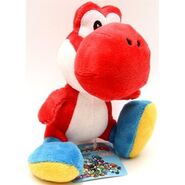 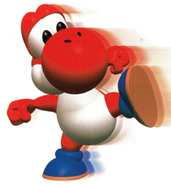