Shy Guy is one of Yoshi's Island's most generic and strange enemies. There are different types of Shy Guys. Some are colored differently, while others have a physical difference, such as being larger than others. They hide their faces within a white mask. They can be swallowed and turned into an egg. An actual Shy Guy's face is shown to be black with yellow eyes. This was first discovered in Luigi's Mansion. Some think Shy Guys are penguins. No one actually knows what there is behind their mask.

An example of what the Shy Guys look like in Yoshi's New Island. 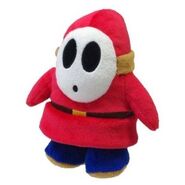 A Shy Guy plush from Japan. 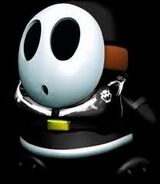 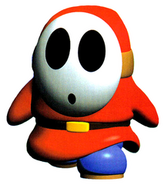