“So admit it..... Don't I look cool in the game screens? Those long, muscular legs on my sturdy toned frame.... I'm the perfect specimen of a man ..... What!?!? You say I look fat and my quadruple chin looks like a waterfall of flab? Shut up! That's just because you have your television set up on widescreen display!”
—Wario, Wario World 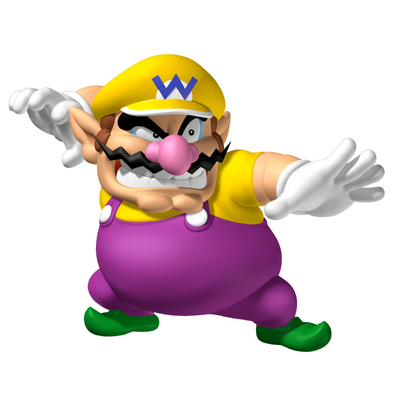 Wario (Japanese: ワリオ, Wario) is a recurring character in the Mario series. He is an obese, muscular, hot-tempered, and greedy man, and Mario's yellow-and-purple clad arch-rival. He usually appears as an antagonist, or in some cases an anti-hero. His name is a combination of Mario's name and the Japanese word warui (悪い), meaning "bad".

Wario's greed pushes him to commit malevolent acts, such as the seizing of Mario's Castle. Wario has also proven to be very cunning as he has tricked Mario on many occasions. He often goes out on his own adventures, from stealing treasure to running a microgame making company. Wario has helped heroes of the Mushroom Kingdom on a few separate occasions as well.

Wario has also appeared as a playable character in all of the cross-overs between the Mario & Sonic series. Throughout these cross-overs, Wario has seemed to have found a new rival in Knuckles and a new ally in Doctor Eggman.

Wario is a creation of the late game developer and Game Boy creator Gunpei Yokoi and designed by Hiroji Kiyotake. Some sources have speculated that Wario was created to represent Nintendo R&D1's frustration with having to work on another developer's series.

In all of the Super Smash Bros. games, Wario's colors were an alternate costume of Mario's - the purple overalls, yellow shirt and cap, green shoes, etc. In Super Smash Bros. Melee, Wario was featured as a trophy. Finally, in Super Smash Bros. Brawl he appears as a playable character, and is available from the start. His standard costume design is his outfit that he is seen in during the WarioWare series. However, unlike the other characters, he has a second outfit, and can also appear in his classic overalls (which have been given an intricate detailing similar to Mario's), depending on the player's preference. However, the player can only play as Wario in his WarioWare outfit in the Subspace Emissary. Wario has one of the best aerial play in the game and is unusually short for his weight class.

Wario's Final Smash is Wario-Man, which transforms him into his superhero counterpart. However, rather than an actual attack, the transformation will power up Wario, which causes his attacks to deal more damage. As such, it could be considered a less extreme version of Bowser's Giga Bowser transformation. All of his attacks are much stronger, and Wario can also run much faster. He also becomes immune to damage and knock-back. He is able to jump higher and practically fly since each of his aerial moves (except down aerial) causes him to gain altitude. Additionally, when Wario-Man unleashes a fully charged Wario Waft, anyone caught in the attack will be KO'd instantly, regardless of their damage.

Like Donkey Kong and Yoshi, Wario has his own distinct emblem (the W on his cap) as opposed to being classified under the Mario characters.

Role in the Subspace Emissary 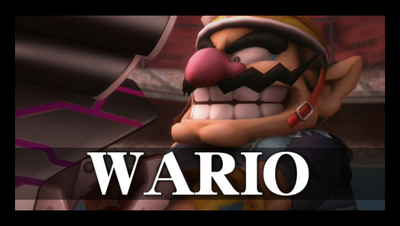 In the Subspace Emissary, he apparently joins the Subspace Army; however, he is never seen with Bowser or Ganondorf or even the Ancient Minister. The official website confirms that he is indeed working for the army, although he takes his orders for granted and does whatever he wants. Early in the game, he shoots the princess that Kirby wasn't able to save from Petey Piranha with his large Dark Cannon. He escapes from the explosion of the Subspace Bomb, taking the trophy with him. Later, at the Ruined Zoo, he attempts to shoot Ness, but Ness dodges every shot. He then aims for Lucas, and Ness jumps in front of him, taking the shot and becoming a trophy. Wario then grabs the trophy as Lucas runs away.

Later, he is traveling with a Cargo with the two trophies he currently has. In the middle of the road, he finds a Luigi trophy which he decides to take. However, as soon as he touches it, Waddle Dees come from everywhere and attack him. They take the Luigi trophy from him, and King Dedede steals Wario's Cargo, revealing that Dedede had planned this out to distract Wario. Later, Wario fights the Pokémon Trainer and Lucas in a desert. However, this time, Lucas beats Wario and turns him into a trophy, which the two leave lying on the ground. After Galleom's Subspace Bomb explodes, the explosion sucks the Wario trophy inside. Wario is later found in Subspace, where he is turned back to life by Kirby. He finds King Dedede and starts threatening vengeance, but Luigi and Ness rush to Dedede's aid, and Wario becomes shocked at his former captives defending who he perceived to be an enemy of theirs. Wario learns that Tabuu is the real leader of the Subspace Army and decides to join in the final battle against Tabuu.

Wario is extremely greedy and will do anything to get money, be it stealing or going on an adventure. He is also a miser, as he never lets anyone touch his treasure. He is also gluttonous and addicted to sweets. Alas, his greedy nature overtakes him and he goes out of control occasionally, even going as far as to double-cross his friends. Like Mario, he has many Italian traits. While he is of Italian heritage, whether he was actually born in the country Italy or not is still a mystery due to the lack of information on his birthplace.

Wario is not as dumb as he appears to be since he makes WarioWare games and can fly a plane. In fact, he may actually be very skilled at electronics, as he made a dimensional teleporter in a few seconds. He also constructed the Mario Kart 64 race track Wario Stadium. The reason many assume he is a bonehead is that he is hot-headed, clumsy, and sometimes forgets his common sense.

Wario is very aggressive, especially in the Mario Kart series, as he pushes racers off the road if in his way. In the Mario Party series, he apparently puts his greedy nature aside to play fair. In general sports, Wario is a braggart and a sore loser, even going as far as to claim that somebody is cheating when he loses.

Wario is also known for his poor hygiene, since he often picks his own nose, and forgets to clean his teeth, which is a problem, since he has a weakness to sweets; Wario frequently gets cavities from the sweets, which is shown in WarioWare Touched!.

Wario is considered scary to most of the Toads and even King Boo (though not as scary as Bowser), as revealed in Super Mario 64 DS.

According to the Wario World instruction manual, Wario weighs 308 pounds (140 kilograms), although he declares it's just his clothes ("I like to layer!"). He has broad, muscular arms, a large belly, and his excess fat overlaps the openings of his overalls; it is shown his arms and legs are pure muscle meaning the rest of his fat must be stored elsewhere.

His skin ranges from a fair to tan complexion. The tone is similar to that of the other men'. His nose is pink, large, slightly pointed down, and he has large nostrils. Wario's mouth is square, as is his head, with blocky teeth and a fixed grin. He also has a round, thick, cleft chin. He has round black-eyes shaped by his cheeks and arched brows. They are outlined with a light blue, baggy, ring similar to Waluigi's. He has very constricted pupils and his iris is of a very dark shade.

Wario is actually not as short as he appears. He appears much wider than others and he's taller than Mario. In fact, Wario is as tall as Luigi regardless of his stout appearance, but he is still shorter than others such as Peach and Waluigi. His athletic abilities tend to make him a powerhouse character, as is expected with his body type.

Wario has light brown hair, the same color as Waluigi's. His hairstyle is the same as Waluigi's as well, having small flips at the back, swooped up bangs, and styled sideburns. He also has a black, zigzag shaped mustache which is a unique trait. 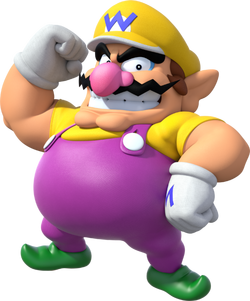