Yellow Yoshi debuts in Super Mario World, first appearing in the level, Star World 3. He can create small earthquakes when jumping with a Koopa Troopa shell in its mouth. Other than that, he is exactly the same as Green Yoshi.

Yellow Yoshi reappears in Super Mario World 2: Yoshi's Island. It is playable in the fourth level of each world.

Yellow Yoshi once again appears in Yoshi's Story. It now has green shoes. It's favorite fruit is bananas. Yellow is sometimes mistaken for a Orange Yoshi.

Exactly the same an in Super Mario World 2, except it has it's green shoes like in Yoshi's Story.

Again, it is playable in the fourth level in each world.

Yellow Yoshi is a playable character in New Super Mario Bros. Wii. It was the second Yoshi found.

Yellow Yoshi is a QR downloadable character in Mario Tennis Open. It's skill is Power, like Bowser, Donkey Kong and Wario. It is the only Yoshi in the game that has the Power skill.

Stomping on a red Shy Guy in Yoshi's Story 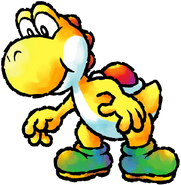 Yellow on The Character selection screen In Mario Kart 8.

Yellow Yoshi in an advertisement for Nintendo Online. 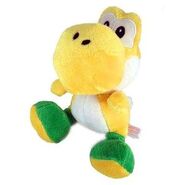