Yoshi (ヨッシー Yosshī, romanized as Yossy) is a green dino who appears frequently through out as a main character in the Super Mario series. He is usually depicted as green, but there are many alternate Yoshi colors, including Red, Pink, Yellow, Light Blue, Orange, Blue, Purple, White, Black and Brown.

Yoshi has his own series with several games that are either puzzle games or platformers, including Super Mario World 2: Yoshi's Island and Yoshi Touch and Go. However, Yoshi does still appear quite frequently in the Super Mario series. The Yoshi series includes characters from the Mario series (usually in their baby forms) as well. He also appeared in many of the spin-off Mario games, such as the Mario Party series, the Smash Bros series, the Mario Kart series as well as in other various Mario sports titles, such as Mario Sports Mix.

Since his debut, Yoshi received universal acclaim from critics and fans and is seen as a cultural gaming icon, His references in TV shows, Films and possible upcoming events have spawned from his popularity in the 1990s. 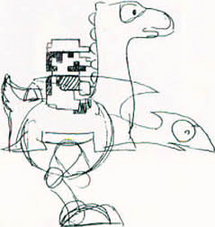 Yoshi debuted in Super Mario World, which was released in 1990. However, Shigeru Miyamoto has stated in interviews that he wanted Mario to ride an animal companion after the completion of Super Mario Bros. Apparently, technical restrictions on the NES kept Mario from being able to ride an animal, but with the development of the Super Famicom in 1990, Yoshi could be created. The character of Yoshi was specifically created by Shigefumi Hino, a graphics designer.

In the Super Mario World article in the History of Mario booklet from the Super Mario All-Stars Limited Edition game for Wii, game designer Takashi Tezuka said that Yoshi was originally going to be a type of Koopa, and the saddle on his back was supposed to be his shell.

Yoshi's appearance has changed dramatically throughout his video game history. In Super Mario World, Yoshi's first appearance, the green dino was very much created in the image of an actual dino. Yoshi had a long neck, small arms that appeared orange on his sprite (but not in the game's art) and a long back. A second design change was used in Yoshi's Cookie, Super Mario All-Stars, and in Super Mario World 2: Yoshi's Island. In those games, Yoshi was made shorter and stouter. Additionally, much longer human-like arms, complete with large hands to manipulate objects, replaced his short, tyrannosaurus-like arms. This design change was developed even more in Yoshi's Story. Instead of being hunched over, Yoshi stood up straight and swung his arms as he walked, much like a human. This design also gave him apparent fingers instead of paw-like hands. This design has stuck ever since.

Yoshi is a little green dino. He has green skin. His stomach, chest and mouth are white as well as the underside of his tail. He has three red spikes on his nape, two large blue eyes and a big round nose. On his back, he has a red shell that can be used for riding him. He also wears orange shoes, sometimes red. In some rare cases, he is barefoot with padded feet. He has been seen with a yellow rein on occasion.

Yoshi is a green dino that is the same size as a human. Yoshi helps Mario on various quests, serving as transportation. Yoshi's are hatched from spotted eggs. Yoshi has a long, sticky tongue that he uses to eat certain objects, like enemies and fruit. Ever since his debut, Yoshi has been one of the major characters in the games. Yoshi is omnivorous, meaning he can eat both plant-like items and meat, but seem to enjoy tropical fruits the most, as displayed in Yoshi's Story and Super Mario Sunshine. Yoshi's nose can detect fruit and other secrets buried underground. Yoshi also has teeth, but they are rarely seen or even used. The few times they are seen mostly is in Yoshi's Story and Yoshi's Island.

Yoshis are very intelligent, being able to defend themselves as infants. In sports games such as Mario Superstar Baseball and the Mario Tennis series, Yoshi is known for his speed and his tongue capability. It's safe to assume that all Yoshi have the same abilities as the main Yoshi. As seen in Yoshi Island, every Yoshi had the same main abilities, no matter what color they were. In later games, Yoshi can eat certain enemies to give him special abilities.

Yoshi is able to lay an egg that has the same color spots as he does. For example, if a Blue Yoshi lays an egg, the spots on the egg will be blue, just like the Yoshi that laid it.

In games such as the Super Smash Bros. series, different colors of Yoshi appear. There are seven colors in total, one being purple in the first game. The purple Yoshi has returned in Super Smash Bros. for Nintendo 3DS and Wii U.

In Super Mario Sunshine, Yoshi can be either orange, purple or pink, depending on the fruit he eats. He will also turn green if he isn't fed fruit once his juice meter runs out. Oddly, Yoshi can't swim.

Though Yoshi is in many games, he has never been heard talking in formal speech. The possible explanations for this are that he either has no voice or he can only simply make simple noises such as saying his name. There have been a few times where he actually has a speaking part. In the Super Mario World cartoon, he is given a speaking part. This is also the case with a type of Yoshi that players may ride on in Super Mario RPG: Legend of the Seven Stars. Later, he is given a speaking part in the Paper Mario series. In these games, The Yoshi species has the ability to speak. In Mario Kart Wii, Yoshi can actually talk in a squeaky voice. He can also be heard speaking in Mario Strikers Charged/Mario Smash Football.

In Nintendo Land, a game for the Wii U, there's a minigame called Yoshi Fruit Cart. In it, the player uses a Yoshi Carr to pick up fruit. If they can collect speedy fruit, they also get an egg with bonus points. There are also presents, with checkpoints and coins. If the player can collect all the fruit, a door will open, leading to the next level. There's also a door with an ? on it. Enter it allows a lot of levels to be skipped. There's also Mini Fruit. This fruit is smaller than the other fruit. Also, there is Flag Fruit. Yoshi can also eat Spicy Fruit to eat all the fruit in his direction. Finally, there's Moving Fruit. This fruit is running around and is difficult to catch. It is important to watch out for pits and bees, and watch Yoshi's fuel.

Since his debut in 1990, Yoshi has received positive reception and is considered an icon of Nintendo, as well as being one of the main mascots. Yoshi's popularity has spawned into a successful spin-off with the classic Super Mario World 2: Yoshi's Island. His spin-off contains several main games, puzzles, platforms and sequels. Yoshi has also been shown in a myriad of merchandise such as toys, memorabilia and even Pogs.

Yoshi has been referenced and featured in many shows and films such as The Simpsons, Robot Chicken, Recess, Steven Universe, The Big Bang Theory, Ready Player One and more. Yoshi appears in the 1993 film Super Mario Bros. as a small dinosaur. He also appears in a DIC Canadian animated series based off Super Mario World in 1991. There have even been possibilities stating Yoshi will soon appear along with the other main Mario characters in the MACY'S Thanksgiving Parade.