Yoshi Wiki
Register
Don't have an account?
Sign In
Advertisement
in: Pages in need of an Infobox, Games, Super Nintendo Entertainment System games,
and 4 more
English

This article is in need of an infobox. You can help Yoshi Wiki by adding one.

Yoshi's Safari is the third game in the Yoshi series created for the Super Nintendo Entertainment System and the first to have a plot (the first two being Yoshi and Yoshi's Cookie). A remake was later made for the Game Boy Advance. The Game was released on July 14, 1993 in Japan, September 1993 in NA, and around 1993 in EU and AU.

In the Story, Bowser and the Koopalings and five powerful minions took over Jewelry Land and imprisoned its rulers, King Fret and Prince Pine, and stealing the twelve gems which keep the country safe, causing a giant earthquake, splitting the land in half. Luckily, Prince Pine is a friend of Princess Peach, who sends Mario and Yoshi to save her friend. After defeating every Koopaling, the player frees King Fret and move to the other half of the kingdom. After defeating Bowser, Prince Pine is freed. The player can then make the game harder by using a code.

Yoshi's Safari is a game scene from the view of Mario, who is riding Yoshi. In the game, the player uses the Super Scope, a light gun connected to the SNES. The player shoots enemies and then run into them. 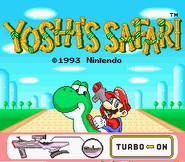 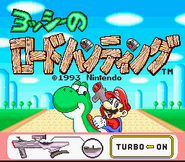