Yoshi Wiki
Register
Don't have an account?
Sign In
Advertisement
in: Pages in need of an Infobox, Characters in Super Mario World 2: Yoshi's Island, Characters in Yoshi's Story,
and 15 more

This article is in need of an infobox. You can help Yoshi Wiki by adding one.

Yoshis are a species of dinosaur that appear in many games in the Mario series. They're very friendly and willing to help anyone, no matter how big or small the issue is. There's eleven known colors. Red, Orange, Yellow, Green, Light Blue, Blue, Pink, Purple, White, Black and Brown.

Yoshis make their very first appearance in Super Mario World. Here, each have a different power, as for Red Yoshis being able to shoot fireballs, Blue Yoshis being able to fly when it has a Koopa Shell in its mouth, and Yellow Yoshis being able to Ground Pound. Here they live in Dinosaur Land where the Koopalings and Bowser stole their eggs. At the end of the game the Yoshis have a big "Thank You!" party for Mario and his friends.

In the game of Super Mario World 2: Yoshi's Island, that is set long before Super Mario World, the Yoshis have to save Baby Luigi and bring Baby Mario to him. This game has all new Yoshis and all new enemies too, along with the return of Shy Guys that had not returned since Super Mario Bros. 2. Here they also bring out a new enemy, Kamek, and Baby Bowser. In the game the Yoshis face lots of enemies and allies. They fight overgrown bosses that Kamek put a spell on, and finally Baby Bowser. The final battle started when Kamek put a spell on him. After the battle the Yoshis win and bring peace again to the Island.

In Yoshi's Island DS, the Yoshis found out that Bowser and Kamek have traveled back in time to kidnap seven Star Children in order to use the energy within their bodies to let Bowser take over the world. They wanted to save them, so they had an adventure to save them. Here, a few new enemies make their appearance and there were new bosses as well. The Yoshis meet Baby Peach, Baby Donkey Kong and Baby Wario. The Yoshis, when they get to Bowser's Castle, fight Baby Bowser, Bowser, and then, similar to in Super Mario World 2: Yoshi's Island, Huge Bowser. Four of the Yoshis fight him together and save the Star Children. They find out that Baby Yoshi was one.

In Yoshi's Story, Baby Bowser gets so tired of losing that he puts a spell on all the Yoshis. This spell doesn't affect six Baby Yoshis, who are still in their eggs and so the Yoshis try to stop Baby Bowser. Baby Bowser also put a spell on the Island that turned it into a book. Once the Yoshis face Baby Bowser, they have a battle with him and later save the Island. Here, there are two new Yoshis, Black Yoshi, which can eat anything and White Yoshi, which can like Black Yoshi eat anything, but also runs faster.

In this game the Yoshis have to save Baby Luigi once again and with help from the Stork, they help get Baby Mario to his brother.

In addition to 10 basic-colored Yoshis, there are exclusive Yoshi units that are designed to relate to the location levels.

Yoshis have appeared in other games as well, and help Mario with anything in most of them. In one, the Yoshis help Mario by being partners to him. In some games, they are just minor characters, or background characters. They sometimes even play in sports.They also make roles in Paper Mario games, except Super Paper Mario, in which they only make a very small appearance on a catch card.

Mario and Sonic at the London 2012 Olympic Games 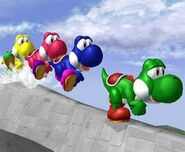